Aidil Zafuan Abd Radzak made his 200th appearance with Johor Darul Ta’zim FC (JDT) after coming on in the second half of the Southern Tigers’ 1-0 win against Sabah FC at the Likas Stadium, Kota Kinabalu.

The defender became the third player to have 200 or more appearances with JDT after Safiq Rahim and Farizal Marlias since donning the Southern Tigers jersey in 2013. 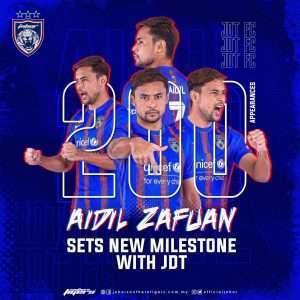