Sultan of Johor received in audience TMJ and members of JDT FC who presented the 2022 Malaysia Cup trophy to His Majesty.

At the age of 20, Daryl has won two trophies this season — Premier League with JDT II and President Cup with JDT III besides making his debut for the first team in an FA Cup match and helping the Sukma Johor squad reach the quarter-finals.

For the record, Daryl is the local top-scorer in the Premier League with nine goals and has scored his first goal for the senior team in the FA Cup match against BRM FC. Luaskan Kuasamu Johor. 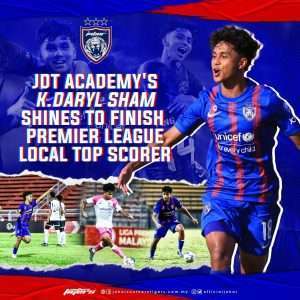