JDT are a high performance club where survival of the fittest is crucial.

Johor Darul Ta’zim FC (JDT) are a high performance club where survival of the fittest is crucial. There is simply no room for complacency.

Arif Aiman Hanapi is a good example of a youngster showing commitment, desire and top performances. Hong Wan and Feroz Baharudin were both 22-year-old players that grabbed the chances they were given this year. Hong Wan started 16 times and came off the bench 12 times while Feroz had 8 starts after impressing for JDT II.

Shahrul Saad is another example. He was not in the first eleven prior to the AFC Champions League, but he showed utmost professionalism, hunger and performance to cement a starting 11 position ahead of a foreign player. As a result, he recorded 34 starts. Syafiq Ahmad also impressed on the training pitch and put in good performances in the 15 games he featured since returning from loan.

These players are a testament that those who produce results and show commitment on the training pitch can thrive at JDT. A large pool of quality players are meant to keep players on their toes and push limits. The club provides the best a player can ask for, from welfare to training facilities and the rest is up to a player to step up to challenge. 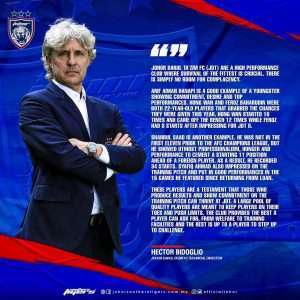