JDT are surprised by the baseless allegations by Kedah FA president that JDT have not settled fees due for a signing a player.

JST
Johor Darul Ta’zim FC (JDT) are surprised by the baseless allegations by Kedah FA president Datuk Seri Muhammad Sanusi Md Nor that JDT have not settled fees due for a signing a player.
For the record, FA of Malaysia (FAM) had decided on a development fee of RM75,000 to be paid to whichever club that signs Akhyar Rashid after the player terminated his contract with Kedah. JDT decided to pay extra and had issued a cheque to Kedah for RM100,000 on 31 December 2018. This cheque however was returned by Kedah citing they wanted to appeal the matter.
Arbitrators later decided that the development fee was not required and quashed the decision by FAM. There has not been a further decision nor a claim made by Kedah against JDT. Our conscience is clear and we would like to advise the Kedah president and Menteri Besar to not throw baseless allegations.
Alistair Edwards, Johor Darul Ta’zim FC Technical Director
Hidup Johor Demi Johor 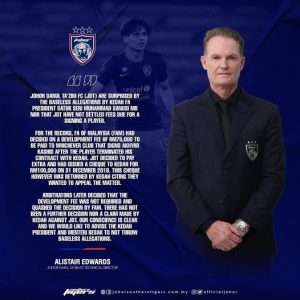