JST
I would like to dispel rumours circulating that Johor Darul Ta’zim FC (JDT) are re-signing Gonzalo Cabrera as a naturalised player.
The club made a decision against signing Cabrera as the Malaysia Football League has a regulation that requires non heritage naturalised players to be a Malaysian for a further five years after obtaining citizenship to be able to be registered as a local player, unless under the national naturalisation programme by FA of Malaysia.
Thus, JDT have decided not to sign Cabrera as he will be 38-years old after five years.
Alistair Edwards, Johor Darul Ta’zim FC Technical Director
Hidup Johor Demi Johor 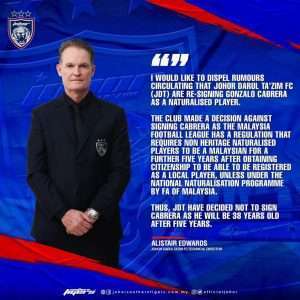