Not only did it ensure valuable experience in the Asia’s elite competition, the JDT players showed they have grown in strength to compete with the continent’s best teams after topping a group comprising former champions Ulsan Hyundai, Guangzhou and J1 League winners Kawasaki Frontale.

Haziq also showed his goalkeeping prowess to step in for injured Farizal Marlias in the group stage while Bergson da Silva bagged six goals. La’vere Corbin-Ong had the most assist after setting up his teammates on three occasions. In total, nine players either scored or made assist as JDT scored 11 goals. Luaskan Kuasamu Johor. 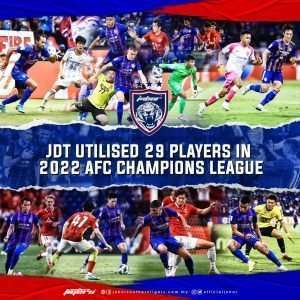