Six teenagers gained plenty of match time with Johor Darul Ta’zim FC II (JDT II) in the 2021 Malaysia Premier League as part of their development programme at the club.

Having shown promise, the club placed these youngsters in the Premier League instead of the Under-21 or Under-19 squads to ensure higher intensity matches and stiffer competition for starting places. The likes of Ramadhan Saifuddin and Arif Aiman Hanapi underwent the same process before successfully staking a claim for first team football. 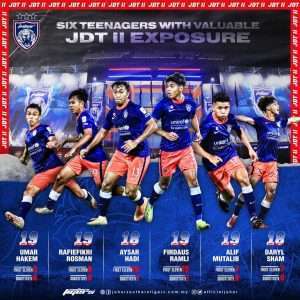