Sultan of Johor received in audience TMJ and members of JDT FC who presented the 2022 Malaysia Cup trophy to His Majesty.

Johor Darul Ta’zim FC’s three teams at the top of the club’s football structure have won their respective leagues in 2022 while the JDT Academy won a further eight trophies, a sign that things are on the right track from the academy all the way to the senior team.

JDT have also won all domestic senior team trophies on offer in 2022 to date starting with the Charity Cup, FA Cup and the recent Malaysia Super League. Luaskan Kuasamu Johor. 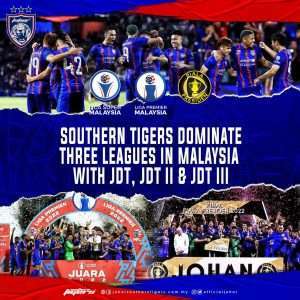